Charles Moore, former editor of the Daily Telegraph and the Spectator, celebrated the release of his new book, Margaret Thatcher - The Authorised Biography: Volume Two, Everything That She Wants, at King’s College London on Tuesday 20 October.

Charles Moore spoke at the sixth event hosted by the Strand Group, the signature seminar series of the Policy Institute at King’s, before an audience of celebrated journalists, academics, senior figures from the civil service and King’s College London students. The event was chaired by Dr Jon Davis, Director of Partnerships at the Policy Institute. 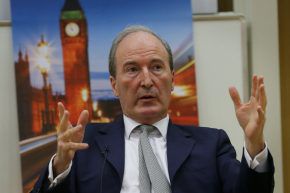 Moore blended anecdote and light-hearted narrative with serious analysis, offering his observations on the challenges of being Prime Minister. He also noted how the period covered in this edition of his biography saw the beginnings of several colleagues contemplating moving against Mrs Thatcher, thinking it was ‘their turn’ to lead. Thatcher in this period, then, was ‘paranoid, but to some extent justified’.

Moore described the period of 1985-6 as a ‘pretty crowded and difficult period on all sorts of fronts’ for the Prime Minister. An example of this was Michael Heseltine’s famous resignation from the government over the Westland helicopter contract, of which Moore’s account has recently attracted headlines. Moore noted that the first item of business for Thatcher’s assembled Cabinet after Heseltine’s dramatic walk out was the implementation of the poll tax, upon which they all then agreed. As Moore observed, ‘Nobody felt very much like arguing about it after what had just happened’, a decision which proved particularly unpopular. 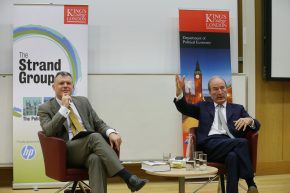 Questions from the audience elicited tales of the Prime Minister ‘rubbing out’ her husband Denis’ written comments in the margins of official government documents that he was not permitted to see; Neil Kinnock’s failure to ‘forensically examine’ Mrs Thatcher over the Westland affair, which Moore feels could have led to her resignation if executed properly, and of Thatcher ‘inviting herself’ to Camp David to see President Reagan just before Christmas 1984.

For the completion of his book, Moore was granted unprecedented access to Mrs Thatcher’s personal and government papers. As such, the focus on the Conservative Prime Minister’s second term in office provides an unrivalled account of how she governed in this period.