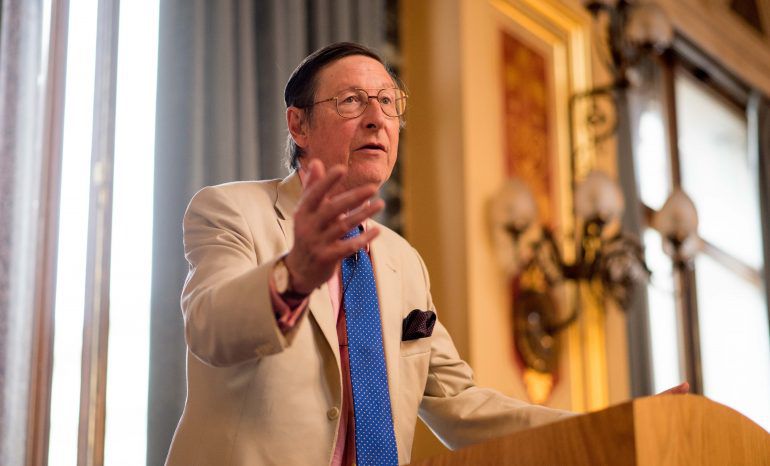 The journalist and military historian Sir Max Hastings gave the sixth Sir Michael Quinlan Memorial Lecture on Wednesday 13 July, at the Foreign and Commonwealth Office. Sir Max’s talk was on the use of espionage and intelligence during the Second World War, and the broader lessons that could be learnt from it.

Peppering his lecture with entertaining vignettes about wartime agents, Sir Max argued that, while much of what is written about intelligence-gathering focuses on what was discovered, the only question that actually mattered was the extent to which intelligence discoveries changed outcomes: ‘Did they prompt action in the field or at sea? All claims about spies’ heroics or codebreakers’ successes, then or now, are meaningless unless they caused things to happen,’ he said.

Sir Max also emphasised how vital it was for the intelligence services to employ only the best and brightest personnel, and made the case for an overhaul of the recruitment processes currently in place at GCHQ and other agencies. Discussing perceived intelligence failures in relation to the Iraq War, Sir Max went on to stress the need to ensure the widest possible range of views from within the intelligence community are properly heard by policy makers and political leaders.

He concluded by surveying the modern intelligence landscape and the challenges for those working in the field. He argued that social media is becoming a critically important battleground, and that the revelations of Edward Snowden underscored how old definitions of patriotism and conflict were no longer universally acknowledged.

Finally, Sir Max expressed his admiration of modern intelligence services and his support for their claims upon national resources, while also encouraging a healthy scepticism about the limits of what intelligence can accomplish, something which he contended was in both their interests as well as the public’s.