Dame Margaret Hodge, MP for Barking gave her inaugural lecture on Wednesday 2 March 2016, reflecting on her experiences as Chair of the Public Accounts Committee for over 5 years

Dame Margaret Hodge, MP for Barking and Visiting Professor at the Policy Institute at King’s College London, gave her inaugural lecture on Wednesday 2 March, reflecting on her experiences as Chair of the Public Accounts Committee for over 5 years. 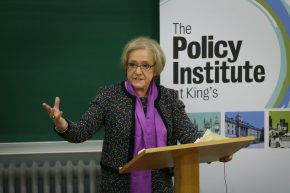 The event marked the 10th of the Strand Group, the signature seminar series of the Policy Institute at King’s. Speaking to a packed lecture theatre, Dame Margaret described how although the powers of the Public Accounts Committee were, like other parliamentary committees, fairly limited they could ‘capture headlines to stimulate debate’ and ‘use the theatre of the committee to draw attention’ to pressing issues.

Dame Margaret spoke candidly of her belief that there is ‘mind boggling unconscionable waste in public expenditure’ that needs to be addressed and that ‘Government seems institutionally incapable of learning from past mistakes.’ Describing her work on tax, she stressed that the Public Accounts Committee agenda was not anti-business, but it was pro-fairness.

During questions, when asked how much her personality had contributed to the enhanced reputation of the committee, Dame Margaret stressed that ‘In our biggest hearings, we worked as a team…really, really effectively as a team’. Outlining how the committee is chaired by a member of the opposition and is constituted to reflect parliament, Dame Margaret described her colleagues as a ‘completely eclectic bunch’, but ‘surprisingly reached unanimity’ on many important issues. 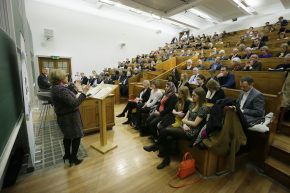 Describing her passion for the work she had undertaken as Chair of the Public Accounts Committee, Dame Margaret concluded her lecture with a quote from Martin Luther King Jr ‘Our lives begin to end the day we become silent about things that matter.’