#Event number14Ed Balls – Speaking Out: Lessons in Life and Politics

Ed Balls, former Shadow Chancellor of the Exchequer and King’s Visiting Professor, launched his new book, Speaking Out, at the 14th meeting of the Strand Group on the 12th September 2016. 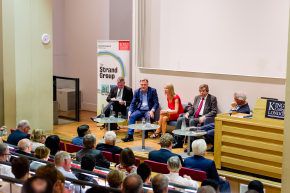 Ed Balls, former Shadow Chancellor of the Exchequer and King’s Visiting Professor, last night launched his new book, Speaking Out, at the Policy Institute at King’s. The event was the 14th of the Strand Group, the Policy Institute’s signature seminar series sponsored by Hewlett Packard Enterprise. In a wide-ranging and candid discussion of his 20 years at the heart of British politics, Balls was interviewed by Mary Riddell of the Daily Telegraph, with William Keegan, Senior Economics Commentator for the Observer, and Sir Nicholas Macpherson, former Permanent Secretary to the Treasury, also contributing questions from the stage.

Balls said he hoped his book would give people some valuable insights into political success and failure, and was frank about the experience of losing his parliamentary seat at the 2015 general election. He said that he missed political life and ‘felt a sense of loss and mourning’ at no longer being a part of frontbench politics and a constituency MP.

Reflecting on the political friendships and working relationships discussed in his memoir, Balls said his intention was for Gordon Brown to come out well, as the stories about him contained important lessons. But Balls lamented the way that, in his view, many policy issues under Labour were often seen through the prism of the Blair-Brown relationship, a relationship that William Keegan highlighted was conveyed with welcome subtlety and nuance in Balls’ book. Interestingly, Balls pinpointed Iain Duncan Smith’s leadership of the Conservative Party as the was worst thing to happen to the Blair government, arguing that the then Opposition was so weak that it allowed the entire political focus to turn to Blair’s relationship with his Chancellor. 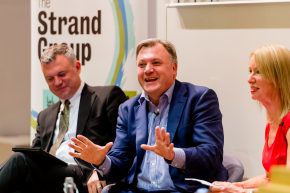 On his relationship with Ed Miliband, Balls said they were previously very close and achieved a great deal together, but then drifted apart from 2010 to 2015, and rarely spoke to each other during the general election campaign. ‘Sometimes friendships don’t survive in politics,’ he said. Balls also gave his opinion on the coalition government during that period, saying that while he thought it was good for the country, it proved disastrous for Labour, creating a sense of national consensus against everything the party had done while in government.

Looking back on his time at the Treasury, Balls revealed that he was ‘never fully persuaded that Tony Blair wanted to join the Euro,’ and said that the Bank of England, the Treasury and regulators should have challenged each other more on what was going on in the economy in the run-up to the 2008 financial crisis.

Balls also turned his attention to more current political events, in particular the present state of the Labour Party. He said that many believed changing the rules of the leadership elections to a one member, one vote system would enfranchise centrist Labour supporters, but in reality had enabled what he described as a ‘hostile takeover’ of the party. This change in election rules – and the fallout from it – has, he said, ultimately been ‘disastrous’ for Labour’s electability. 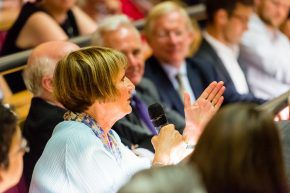 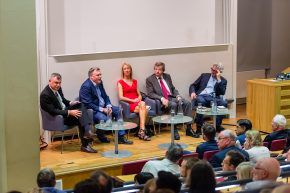 Balls cautioned that the party will have to go through a ‘regenerating debate’ about the future direction of the party, which could take a very long time, and that to ‘save’ Labour, there may have to be a focusing of people’s minds on the importance of actually governing versus simply being in opposition. The party splitting anytime soon would, however, be ‘massively premature’, he said. Based on his experience in government against what he saw as a weak official Opposition, Balls argued that ‘the best thing that could happen to Theresa May would be for Labour to get a grip of itself’.

Expanding on the leadership of the Conservative Party, Balls said that the new Prime Minister’s decision not to define what Brexit means yet ‘feels like a mistake’, recommending that she set out, in broad terms, what direction she wants to go in post-Brexit. He also voiced his frustration about the strategy adopted by David Cameron during the EU referendum campaigning, contending that he made a big mistake in ‘allowing the status quo to become the offer’ for potential Remain voters. 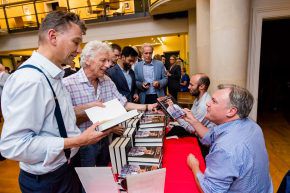 Summing up, Balls expressed pride in his accomplishments but, despite missing political life, downplayed the possibility of a future role in politics. The chances of Labour’s National Executive Committee picking him as a by-election candidate for Cameron’s newly available seat in Witney were, he joked, ‘pretty slim’.