#Event number1Sir Nicholas Macpherson on ‘The Treasury and the Union’

Sir Nicholas Macpherson, the Permanent Secretary to the Treasury and one of several newly appointed Visiting Professors at King’s College London delivered a timely lecture on ‘The Treasury and the Union’ on 19 January 2015. 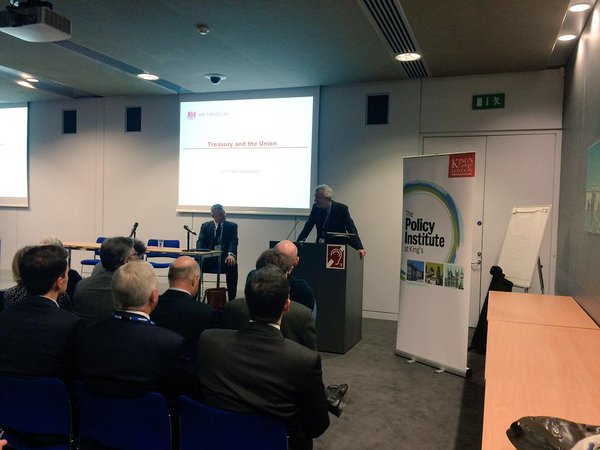 In front of a diverse audience of Strand Group invitees from the worlds of governance, business and academia, alongside Treasury officials, Sir Nicholas outlined the Treasury’s historic role in financing the United Kingdom, before discussing its more recent role in the Scottish Independence Referendum.

Sir Nicholas noted that it was ‘striking that the Treasury coordinated all the work that set out the case for the Union’, explaining that this was seen as a ‘head versus heart referendum’, and it was thought by ministers that the economic case would prove most effective in encouraging a ‘No’ vote.

‘Her Majesty’s Treasury is by its nature a unionist institution. The clue is in the name.’

Outlining the results of the Treasury’s research, the Permanent Secretary said that an independent Scotland ‘would have had the largest deficit of any advanced country’, as well as a higher unemployment rate and a higher exposure to financial shocks due to the disproportionate size of its banking sector when compared to its population.

The Permanent Secretary also downplayed the role of North Sea oil in an independent Scotland: ‘Anybody who’s been in the Treasury for any amount of time is used to North Sea production disappointing on the downside… the time when North Sea revenues amounted to 8% of GDP has passed.’

‘Absolutely certain’ there was no chance of currency union

Responding to a question from the Independent on Sunday’s John Rentoul, Sir Nicholas said the Treasury had had ‘extensive debates’ on whether Alex Salmond took the right approach regarding a currency union with the UK, but that ‘we didn’t regard this as our problem. It was one for Mr Salmond to solve’.

Lord O’Donnell also congratulated the Permanent Secretary on maintaining civil service independence throughout the referendum. Sir Nicholas responded by stating that the civil service was not independent, in that it serves the government of the day.

Sir Nicholas told the assembled group that he was ‘not a great fan of the civil service doing endless war games about different outcomes of elections’, but that if the polls were to stay the same, he thought that officials should be looking at what to do in cases of minority government. ‘If you’re in the Treasury, you’re always worried about what minority governments lead to, and who pays for it. But we’ll cross that bridge when we come to it’. The Permanent Secretary said that he would be taking advice from his predecessors, such as Sir Douglas Wass, who was in the audience, and others.