#Event number3Tony Blair and Sir Michael Barber: ‘How to run a Government’

Former British Prime Minister Tony Blair joined Sir Michael Barber, at King’s College London to discuss how best to run a government. Sir Michael was the inaugural Head of the Downing Street Delivery unit in Tony Blair’s Government between 2001 and 2005.

Former British Prime Minister Tony Blair joined Sir Michael Barber, Chief Education Advisor at Pearson, at King’s College London this morning to discuss how best to run a government. Sir Michael was the inaugural Head of the Downing Street Delivery unit in Tony Blair’s Government between 2001 and 2005. The distinguished statesmen spoke at the third event of the Strand Group, the Policy Institute at King’s College London’s signature seminar series. The event, chaired by Dr Jon Davis of the Policy Institute, also marked the launch of a new teaching module offered by the university.

Professor Ed Byrne, President and Principal of King’s College London introduced the event, highlighting how it showcased King’s as a world leading university, tackling some of the world’s most important questions with first class teaching and cutting edge research.

Addressing a diverse and distinguished audience from the world of government, the civil service, business and academia, Sir Michael recalled how the Blair government’s focus on delivery had ‘turned out to be a global innovation’.

Sir Michael noted that ‘effectiveness of government is one of the big moral issues of our time’. Tony Blair responded to Sir Michael, commenting that ‘We didn’t realise that Michael Barber’s work was revolutionary at the time.’ Blair joked that, on his travels around the world, he was often greeted with, ‘It’s wonderful to see you, but you don’t know Michael Barber, do you?’

The former Prime Minister agreed with Sir Michael that delivery as a science was still in its infancy, and highlighted the important role of the Delivery Unit in allowing the government to continue to focus on health, education and other important domestic issues while post-September 11th foreign policy issues dominated the Prime Minister’s time.

Barber and Blair then took questions from the audience. Responding to a question about the devolution of power, Mr Blair stated that, ‘What sometimes happens is that people think that decentralisation itself delivers. It doesn’t deliver anything unless the people you decentralise to get the job done.’

Asked about the current government’s attempts to improve its implementation structure Blair emphasised that ‘The guy at the top’s got to be driving it the whole time’ which Barber agreed with. ‘If the Prime Minister wants to ensure successful delivery, he personally will have to pay attention to it’. 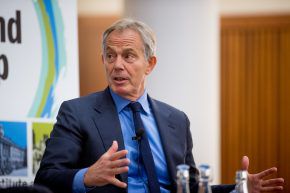 Tony Blair; ‘A lot of government today is not ideological, it’s about practical solutions – what will make a difference in the modern world?’.

Discussing the politicisation of the civil service, Blair claimed that, ‘There is a new deal that we need to put at the heart of the way politicians interact with civil service today’. Outside influence should be embraced, but civil servants also needed to be confident that ministers would back them. He summarised his position; ‘Politicisation in a crude way, absolutely not. Opening the system up to new ideas – that is the way forward.’ 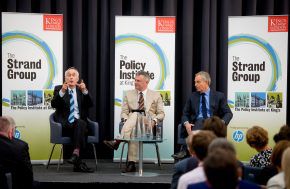 The Strand Group’s events, sponsored by Hewlett Packard, bring together senior figures from the worlds of governance, civil service, business, journalism and academia in a regular forum to discuss the most pertinent government and political issues of the day, often using the recent past to shed light on contemporary challenges. These events are designed to be of equal value to policymakers, commentators and today’s students of government.

Prominent attendees at this event included Tessa Jowell MP, Rt Hon David Willetts, and journalists including Adam Boulton from Sky News, John Rentoul, from the Independent on Sunday, as well as Sebastian Payne from The Spectator. They were joined by a large civil service presence, several business figures, students and academics.